You Are Here: Department of Physics of Molecular Imaging Systems 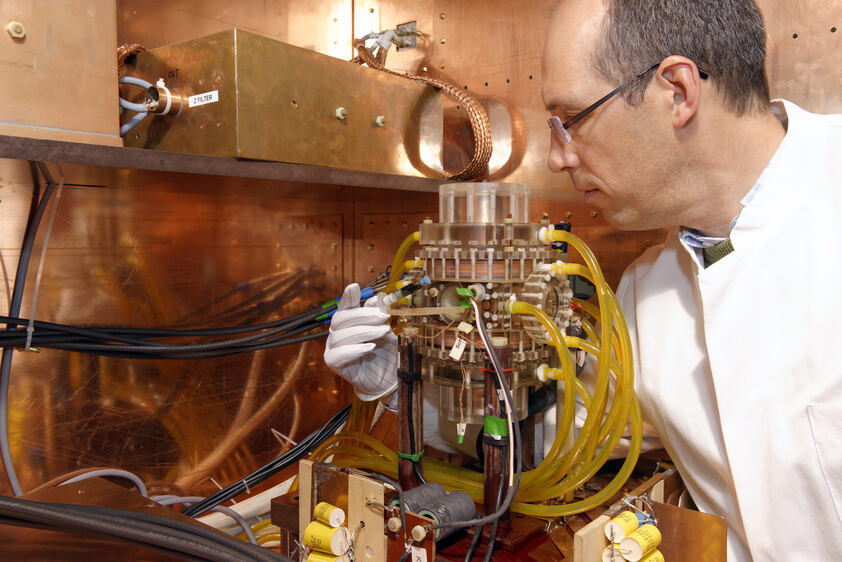 Medical imaging has a key role in the field of diagnostics, interventions, therapy planning and for the assessment of the therapy response. The demand to personalize medical imaging or to improve it with respect to accuracy and cost-effectiveness is continuously growing. In particular, the development of new treatments such as cell-based therapies are requesting for highest sensitivity and precise quantitative imaging. In this respect, magnetic resonance imaging (MRI), which doesn’t require ionizing radiation, offers a huge variety of different contrasts and thus offers a high potential for future clinical applications.

In contrast to computed tomography (CT), MRI offers excellent soft-tissue contrast, the measurement of tissue composition, oxygen concentration, pH-values, temperature distributions, dynamics volumes, perfusion and diffusion etc. MRI is based on the nuclear resonance effect, which is mostly the imaging of hydrogen nuclei (protons) in the case of medical applications. The basic idea of MRI to reconstruct three dimensional (3D) tomographic images is based on the fact that the frequency of the nuclei resonance (Larmor-frequency) depends linearly on the outer magnetic field. Hence, an MRI uses strong static (main field), quasi-static (gradient coils for spatial encoding) and radiofrequency (RF) fields to transform the MRI signal into a 3D tomographic image. Beside anatomical medical imaging modalities such as MRI and CT, positron emission tomography (PET) and single photon emission computed tomography (SPECT) offer in-vivo imaging of molecular processes like metabolisms or receptor density. In this way, nuclear imaging modalities offer another view on disease occurrence, progression and therapy response.

The basic idea of PET and SPECT is to use radioactively labeled molecules as imaging tracer. In SPECT the tracer emits gamma photons with about 140 – 365 keV, which are detected by use of mechanical collimators. In difference to this mechanical collimation, PET uses the emission of positrons, which annihilate to pairs of gamma photons with 511 keV. As the gamma photons are emitted coincidently in nearly opposite direction, the annihilation can be detected along this “line of response” (LOR). Furthermore, with the measurement of time-of-flight, the location of the annihilation along this LOR canbe measured. Due to the electronic instead of mechanical collimation, the sensitivity of PET is nearly two orders of magnitude higher compared to the sensitivity of SPECT. For both SPECT and PET a large variety of tracer exist, which offer imaging of all kind of molecular processes.

A completely new contrast agent based imaging modality has been invented in 2001 by Philips Research: magnetic particle imaging (MPI). MPI uses magnetic nanoparticles (MNP) with a core size of about 20-30 nm as a contrast agent which are magnetically excited. Thus this imaging modality does not involve the use of ionizing radiation. The core idea of MPI is the highly nonlinear response of the MNP to magnetic excitation. Due to this property, the NMP will generate a response that can be well separated from the magnetic excitation field. A particular feature of MPI is that it can be very fast. An acquisition of 45 3D volumes per second has been demonstrated.

The Physics in Molecular Imaging System (PMI) department of the Faculty of Medicine is affiliated with the Faculty of Physics. PMI conducts EU, BMBF and industry funded research to understand, optimize, combine and invent new methods and technologies for the field of medical imaging. Research topics are along the entire imaging chain, starting from fundamental physics, new detector and processing concepts for PET (in particular digital silicon photomultiplier), new MRI methods and correction technologies, MPI physics and instrumentation, and novel quantitative image reconstruction algorithms for actual and future imaging modalities. A special focus of PMI is the combination of tracer-based methods such as PET and MPI with MRI with the focus on hybrid medical imaging using different modalities simultaneously. In 2012 PMI has jointly developed with partners from academia and industry in Aachen the world first simultaneous PET-MRI system based on digital silicon photomultiplier.